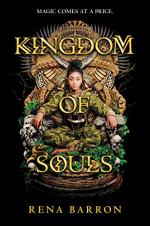 Get Kingdom of Souls from Amazon.com

Everything you need to understand or teach Kingdom of Souls by Rena Barron.

As the daughter of two powerful magic users, Arrah is desperate for gifts of her own. However, when children in the kingdom go missing, Arrah decides to pay for her magic with years of her life, desperate to save her world. But there are much greater forces at play that Arrah realizes, and she soon finds herself wrapped in a world of ancient magic, wars, and the return of a Demon King that was long forgotten. Kingdom of Souls focuses on themes of family, self-worth, and sacrifice.