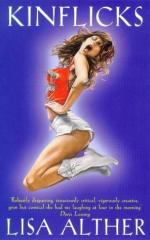 Get Kinflicks from Amazon.com

Everything you need to understand or teach Kinflicks by Lisa Alther.

Kinflicks is a grab bag of nearly every social-political issue of the 1960s and the 1970s as the heroine goes through numerous "passages" in search of her identity, which she still has not found at the end. Ginny, at first a conventional cheerleader type, becomes attracted to fads and mentors, participating in most of the radical-liberal causes of the times: protest, drugs, feminism, sexual experimentation (including lesbianism), and communal living. Exposed to other influences, she can be transformed back into a dainty, prim housewife, only temporarily. The book satirizes a variety of life styles (and their zealots) equally, as the author brings out the absurd exaggerations of every movement.

Ginny's shrill fanaticism, and the ease with which she is led in and out of causes, were typical in the 1960s among many of those associated with counterculture movements. The jarring changes Ginny goes through...