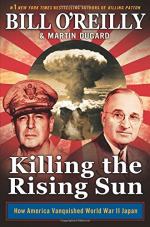 Get Killing the Rising Sun from Amazon.com

Everything you need to understand or teach Killing the Rising Sun by Bill O'Reilly.

Killing the Rising Sun describes the decision-making that defeated Imperial Japan and ended World War II. Particular focus is paid to the bombings of Hiroshima and Nagasaki, which remain controversial but which the authors argue were necessary to prevent an invasion of Japan that would have cost up to a million American lives. Based on primary source documents, the authors argue that Japan was not considering surrender before the bombings, that their use was necessary to ensure a stronger U.S. position in Asia compared to the Soviets, and to encourage Japan to cooperate in post-war reconstruction that would make them an ally. Particular focus is paid to Japanese war crimes, as well, which often exceeded the bombings in their barbarity.