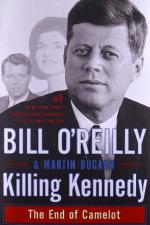 Get Killing Kennedy from Amazon.com

Everything you need to understand or teach Killing Kennedy by Bill O'Reilly (commentator).

Bill O'Reilly and Martin Dugard are the authors of "Killing Kennedy: The End of Camelot." The book details the rise and fall of John F, Kennedy, a man considered to be perhaps one of the most influential and well-loved presidents in American history.

The prologue begins with John Fitzgerald Kennedy (JFK) being sworn into office as the President of the United States. Kennedy is the youngest president to ever be inaugurated...