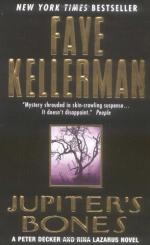 Get Jupiter's Bones from Amazon.com

Everything you need to understand or teach Jupiter's Bones by Faye Kellerman.

Freedom is thus Kellerman's dividing line between acceptable religious extremism and harmful cult behavior. As old as Adam and Eve, the theme of free will pops up throughout Jupiter's Bones. In the eyes of guru Bob, free will is the ultimate corrupter. Bob tells Decker that the Order is a "modern-day Eden"—as it existed prior to the fall—a "perfect world" with absolute rights and wrongs. Bob then warns Decker how freedom has ruined the outside world.

"Out there . . . . it's strictly Einstein where everything's relative. Or Max Planck and quantum mechanics where things are random and unpredictable." Thus, the children of the Order are given no free will.

They follow the absolute rules of the Order, and every aspect of their lives is controlled by the Order's gurus. This theme is exemplified in Vega, the teenage girl who has lived her whole life in the...