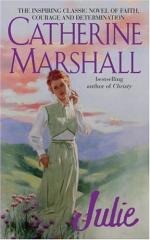 Get Julie from Amazon.com

Everything you need to understand or teach Julie by Catherine Marshall.

The social conditions which are presented in Julie have been taken from the author's own life as a teenager in Keyser, West Virginia, where her father served as a Presbyterian minister and from the events surrounding the tragic Johnstown flood of 1889. In the foreword to the first edition of Julie, Leonard LeSourd writes that Catherine Marshall prepared for the writing of the novel by studying the techniques of running small-town newspapers as well as the social issues and political pressures that their editors face. Marshall also did research on the events of the Depression years during the 1930s and the growth of the early union movement. Christy explores many issues of social concern which have been marked by controversy. Race relations come into focus as the reader learns of the rejection faced by Julie's father, an ordained minister, when he attempts to integrate his...