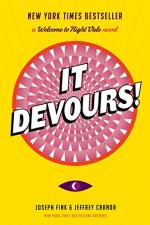 Get It Devours! from Amazon.com

Everything you need to understand or teach It Devours! by Joseph Fink.

It Devours!, by Joseph Fink and Jeffrey Cranor, is a novel in the Welcome to Night Vale series that tells the story of Nilanjana, a scientist who moves to the surreal and dystopian town of Night Vale, as she attempts to aid her boss and friend, Carlos, in an investigation of an otherworldly portal that appears on the outskirts of town. As Nilanjana delves deeper and deeper into the mysteries of Night Vale, she begins uncovering government conspiracies, apocalyptic religious schemes, and giant centipedes all while making new friends and trying to carve out a place for herself in this bizarre world. The novel addresses themes such as the conflict between science and religion, the struggles of being an outsider, coping with impermanence, the importance of valuing differing perspectives, and the perils of authoritarian leadership.

The It Devours! Study Pack contains: