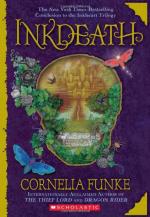 Get Inkdeath from Amazon.com

Everything you need to understand or teach Inkdeath by Cornelia Funke.

Inkdeath is a fantasy novel written by award-winning German author Cornelia Funke, and the third in its series. It is a novel set inside another novel, which has been written so well as to come to life. Numerous characters, good and evil alike, struggle to influence the outcome of the story by the use of words alone.

Inkdeath begins with Mortimer, the Bluejay, in the forest near Ombra, attacking the forces...