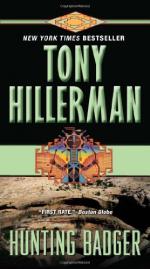 Get Hunting Badger from Amazon.com

Everything you need to understand or teach Hunting Badger by Tony Hillerman.

A major theme in Hunting Badger is the inadequacy of modern technology and urban law enforcement in the face of Western geography and Western social realities.

The FBI officials are nonplused at their own ineffectuality, even with a full force of agents assisted by Navajo and Apache tribal officers, the Border Patrol, four kinds of state police officers, county sheriffs, and twenty other kinds of law enforcement officers.

Leaphorn, however, notes that there are enough canyons in that territory to swallow up ten thousand policemen. Tribal officers joke that FBI does not stand for "full-blooded Indian" and that FBI urbanites cannot tell the difference between a gully, an arroyo, a wash, a cut, or a creek, so tracking men who can just will not work. If...

Tony Hillerman
6,252 words, approx. 21 pages
“I tend to have two sorts of fans,” Tony Hillerman observed in a 1986 interview with Sue Bernell and Michaela Karni: “One kind are the mystery readers, who care more about plot. The oth... Read more