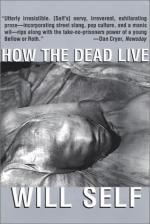 Get How the Dead Live from Amazon.com

How the Dead Live Summary
Will Self

Everything you need to understand or teach How the Dead Live by Will Self.

How the Dead Live Summary

The major thematic cruxes of How the Dead Live are the slippery life/death opposition, the body, and addiction.

Perhaps the most obvious of the novel's themes involves the life/death barrier and its permeability. This threshold is crossed a number of times in the hovel, sometimes realistically, sometimes fantastically. Over the course of the novel, Lily Bloom moves from life to death and back again, and in doing so she discovers that there was always already death in life and vice versa.

She comes to believe that "the boundaries between life and death [are] provisional, confused and indeterminate." For Lily, the living imagine themselves concerned with the present, with life, when, in reality, "Their minds are full of dead ideas, images and distorted facts. Their visual field is cluttered up with decaying buildings, rusting cars, potholed roads . . ."

As we have seen already, death's presence in life is...

The How the Dead Live Study Pack contains:

How the Dead Live Short Guide

Will Self
6,455 words, approx. 22 pages
Will Self became a ubiquitous presence in London media circles in the 1990s. During the British general election campaign of 1997 he was alleged to have taken heroin in the toilet of Prime Minster Joh... Read more
Download the Study Pack