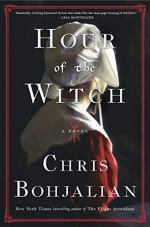 Get Hour of the Witch from Amazon.com

Everything you need to understand or teach Hour of the Witch by Chris Bohjalian.

Hour of the Witch Overview

Chris Bohjlian's novel, Hour of the Witch, is the story of Mary Deerfield, a young woman married to a cruel man, Thomas Deerfield, in Boston in the mid 1600s. Thomas's actions drive Mary to take the extreme step of filing for divorce, but the magistrates rule that she must return home. As the situation escalates, it seems someone is using witchcraft against Mary. She stands trial for her life. The night after she is sentenced to death, Mary learns the truth – that Thomas's daughter has been trying to kill her father for the abuse she suffered at his hands. The novel's main themes are gender roles, the effects of gossip, and superstition.

The Hour of the Witch Study Pack contains:

Hour of the Witch Study Guide