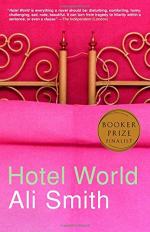 Get Hotel World from Amazon.com

Everything you need to understand or teach Hotel World by Ali Smith.

Ali Smith's experimental novel Hotel World tells the story of the death of Sara Wilby, who fell down an elevator shaft in a hotel, and the grief of her younger sister, Clare. The novel brings together five characters across five chapters: the ghost of Sara, a homeless woman named Else, the hotel receptionist Lise, a journalist named Penny, and finally Clare Wilby. Their paths all cross on one winter's night in the Global Hotel, where Sara had been an employee. Each chapter in the novel is written in a different grammatical tense, allowing Smith to explore the past, present, and future of grief and the passing of time through a range of perspectives.

You might also be interested in:
How to Be Both
Autumn: A Novel
Winter
Spring: A Novel