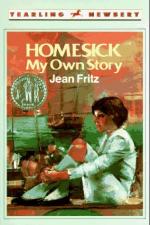 Get Homesick: My Own Story from Amazon.com

Everything you need to understand or teach Homesick by Jean Fritz.

Homesick: My Own Story Summary

Home and family play integral roles in forming a person's definition of self but often elude exact definition themselves.

What is "home," and what makes a "family"? Jean Guttery is born in China and grows up there, surrounded by her parents and other expatriate adults who still consider America their home. Jean has only her imagination and the letters from her grandmother in Pennsylvania upon which to base her image of "home."

As she dreams about the U.S., she almost forgets how much she cares about China.

Jean's feelings about China are mixed; she loves the countryside and people and speaks the language fluently, but she cannot stop wondering about America. Jean's mother believes in the axiom, "When in Rome, do as the Romans do," but Jean refuses to sing the British national anthem in her British-run school. Her father finally points out that "God Save the...

The Homesick: My Own Story Study Pack contains: