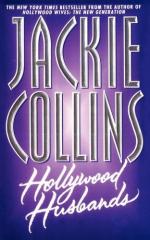 Get Hollywood Husbands from Amazon.com

Everything you need to understand or teach Hollywood Husbands by Jackie Collins.

The lives of the rich and famous with their twists, turns, and little secrets are endlessly fascinating. Collins develops this theme in nearly all her books, and it has brought her tremendous financial success and popularity. Tabloids and television shows that probe the lives of the entertainment world's celebrities are enormously popular; Collins takes these kinds of people and incidents, fictionalizes them, and tells a gripping, convoluted story about them.

But there are also other themes, such as the moralistic "crime does not pay": Any characters who do dastardly deeds pay for them before the last page of the book. For example, Clarissa Browning got away with several murders in her youth. Granted, the victims were terrible people who did her great harm, but American morality and justice dictate that one cannot get away with murder.

Although she is never caught by the authorities and charged with any...