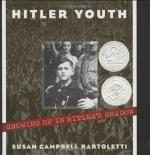 Get Hitler Youth: Growing Up in Hitler's Shadow from Amazon.com

Everything you need to understand or teach Hitler Youth by Susan Campbell Bartoletti.

Hitler Youth tells the story of the Hitlerjugend, which was formed to indoctrinate German youths with respect to the policies and beliefs of Adolf Hitler and Nazism. The Hitler Youth became an important part of the Nazi war effort.

The Hitler Youth was started as early as 1922. Hitler made political use of the organization in 1932, when a Hitler Youth named Herbert Norkus was stabbed to death by a Communist youth group...