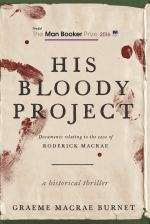 Get His Bloody Project from Amazon.com

Everything you need to understand or teach His Bloody Project by Graeme MaCrae Burnet.

His Bloody Project is seventeen-year-old Roderick Macrae's pseudo-historical novel which overviews the documents relating to the murder of three members of a Culduie family. The majority of the book consists of a written recollection of the events leading up to the murder, written by Roddy himself, supposedly collected by the author. The rest of the novel is made up of murder investigation documents, reports of Roddy’s trial, and documents belonging to Roddy’s defense counsel. While the book itself does not take a stand regarding Roddy’s innocence, it forces the reader to evaluate Roddy’s mental state and whether he was justified in his crime.