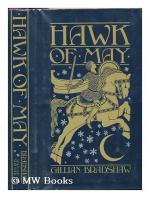 Get Hawk of May from Amazon.com

Hawk of May Summary
Gillian Bradshaw

Everything you need to understand or teach Hawk of May by Gillian Bradshaw.

Hawk of May Summary

The controlling theme of the trilogy, also introduced in this first book, is the moral conflict of good and evil, here posited as the Light and the Dark.

Gwalchmai as a boy discovers the Dark manifested in the person of his own mother, Morgawse, a sorceress. When Morgawse follows her grim experiments in the occult to a brutal human sacrifice, her son rebels and runs away from home. In one of his many subsequent adventures he finds himself in the Isles of the Blessed, home of the sun god Lugh. It is here that Gwalchmai decides to commit his life to the defense of the Light, as symbolized in Lugh, against the threats of the Dark, symbolized in his mother.

These adventures also represent the growing up and coming of age of Gwalchmai. It becomes the young man's deepest desire to join the Family of King Arthur, whom...

The Hawk of May Study Pack contains:

Hawk of May Short Guide