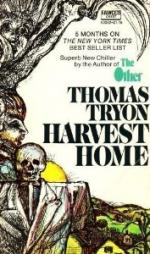 Get Harvest Home from Amazon.com

Everything you need to understand or teach Harvest Home by Thomas Tryon.

Mr. Constantine, would-be artist turned advertising executive, his nervous, rundown wife, Beth, and their chronically-ill daughter, Kate, exemplify those whom Thoreau described as living lives of quiet desperation. Their flight from New York City to Cornwall Combe partakes of the romantic backto-the-land movement — conveniently hastened by Ned's losing his job and the pair of them falling in love with an eighteenth-century house that needs renovating.

They meet a great many local people who receive somewhat sketchy, but distinctive characterization: a kind neighbor, Maggie Dodd, and her blind husband, George, who is always listening to recordings of classic books; a traveling peddler who sees too much, talks too much, and suffers a grisly fate; a stalwart, handsome, blond farmer (almost a caricature of the Jolly Green Giant) who is the Harvest Lord, a title held for seven years; a local sexpot named Tamar and her feebleminded girl-child, a...