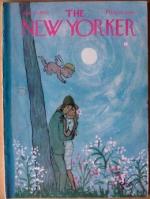 Everything you need to understand or teach Hapworth 16, 1924 by J. D. Salinger.

The seven-year-old Seymour in his letter reveals the strong influence on his beliefs of Indian religious mysticism, particularly the Vedanta branch of Hinduism. In this connection a functioning belief system becomes evident as the infant terrible matter-of-factly prophesies future events in his life and the lives of certain other Glass family members, especially Buddy. Foreknowledge and predestination, reincarnation (e.g., Seymour's allusions to his "appearances"), and revelation help shape the oracular, egocentric world view by which he lives.

For all his very high-and-mighty manner, young Seymour acts as if he were under the spell of a very powerful being; an element of madness happens to accompany his tendency toward religious mysticism.

While his sexual awareness and responsiveness to female allure are given considerable attention in this story, much more is made of the child's literary interests and proclivities. He mentions his having written a considerable amount of poetry...

J. D. Salinger
6,743 words, approx. 23 pages
Best known for his controversial novel The Catcher in the Rye (1951), J. D. Salinger (born 1919) is recognized by critics and readers alike as one of the most popular and influential authors of Ameri... Read more

J. D. Salinger
5,038 words, approx. 17 pages
J. D. Salinger remains well known for a single novel: The Catcher in the Rye, which was hailed as "brilliant" upon its publication in 1951. While several of the short short stories Salinger also wrote... Read more

J. D. Salinger
6,356 words, approx. 22 pages
Biography EssayThe entire body of writing by which Jerome David Salinger wishes to be known is contained in four small books—one novel and thirteen short stories. All of these were published in ... Read more

J. D. Salinger
5,007 words, approx. 17 pages
J. D. Salinger was born on January 1, 1919, the second child and only son of a Jewish father, a prosperous importer of hams and cheeses and a Scotch-Irish mother. Very little is known about Salinger. ... Read more

J(erome) D(avid) Salinger
5,697 words, approx. 19 pages
The entire body of writing by which Jerome David Salinger wishes to be known is contained in four small books--one novel and thirteen short stories. All of these were published in the eleven-and-a-h... Read more

J(erome) D(avid) Salinger
2,992 words, approx. 10 pages
A few writers are so enveloped in their reputations that their work is virtually impossible to read without being distracted by their fame and their relation to the public. No one else has ever been k... Read more

J(erome) D(avid) Salinger
8,006 words, approx. 27 pages
Confronting another in an apparently unending series of collected essays about J. D. Salinger 's The Catcher in the Rye (1951), a British reviewer once asked with some asperity why nearly every Ameri... Read more
Download the Study Pack