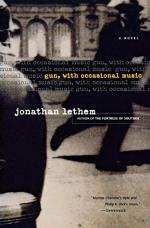 Get Gun, With Occasional Music from Amazon.com

Everything you need to understand or teach Gun, With Occasional Music.

Gun, with Occasional Music is a novel by Jonathan Lethem. The novel is set in a dystopian future America, where an authoritarian government has stripped away many personal freedoms. It is even illegal to ask questions unless you are a government-sanctioned inquisitor. The protagonist, Conrad Metcalf, is a licensed private inquisitor. After a local doctor is found murdered, the government decides to arrest a man named Orton Angwine as the perpetrator. Angwine claims that he is innocent, and he hires Conrad Metcalf to investigate the murder. The novel explores themes of authoritarianism, injustice, morality, and institutional corruption.