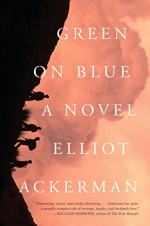 Get Green on Blue from Amazon.com

Everything you need to understand or teach Green on Blue by Elliot Ackerman.

When Aziz’s brother was injured in a mortar attack, Aziz was manipulated into fighting with the Special Lashkar, a military group funded by the Americans, in order to pay for Ali’s medical care in the novel “Green on Blue” by Elliot Ackerman. Aziz believed the fighting would give him a chance to get badal, or revenge, on the Taliban group that injured his brother. Instead through a series of manipulative moves by the commander of the Special Lashkar, Aziz became the leader of that militant group. Through his journey, Aziz learned the deceitful and political nature of war as well as the idea that revenge doesn’t always bring peace and closure.