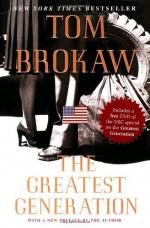 Get The Greatest Generation from Amazon.com

Everything you need to understand or teach Greatest Generation by Tom Brokaw.

The greatest Generation by Tom Brokaw is a book about the experiences of different people during World War II and afterwards. The people who were involved in the war were born during the prosperity of the twenties and then watched the nation plunge into the Great Depression. Many grew up in extreme poverty. Others came from affluent families. Whatever their background, they were all patriotic and wanted to help in the...