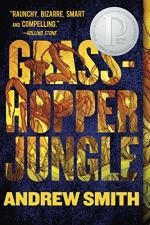 Get Grasshopper Jungle from Amazon.com

Everything you need to understand or teach Grasshopper Jungle by Andrew Smith.

Teen historian Austin Szerba narrates the history of the end of the world in the novel “Grasshopper Jungle” by Andrew Smith. Austin and his best friend, Robby Brees, tried to exterminate the six-foot-tall praying mantis like creatures taking over their town of Ealing, Iowa after a decades-old plague is accidentally unleashed on the town. At the same time he was trying to save the world, Austin struggled with a variety of issues in his life including his brother's injury in Afghanistan, questions about his sexual orientation, religious uncertainty and the importance of his heritage.