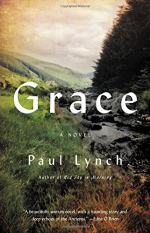 Get Grace (Lynch) from Amazon.com

Everything you need to understand or teach Grace by Lynch, Paul.

Grace, by Paul Lynch, is the lyrical story of a 16-year-old girl's odyssey through Ireland during the Great Famine. Haunting and poetic, Grace tells the story of one of Ireland's most trying times, which resulted in the deaths of more than one million people. Grace's journey is a devastating testament to the strength of the human spirit, and illustrates the terrible things we must sometimes do to survive. The novel is saturated with the spirit of Ireland, its history as well as its legends and superstitions. Grace examines the destruction wreaked by the Great Famine, but it also depicts the resilience of the human spirit in the face of pain and unfathomable tragedy.