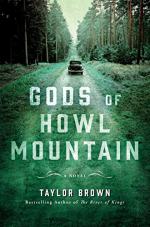 Get Gods of Howl Mountain from Amazon.com

Everything you need to understand or teach Gods of Howl Mountain by Taylor Brown.

Gods of Howl Mountain by Taylor Brown takes place in North Carolina in the autumn of 1952. Rory Docherty is a former Marine in the Korean War who was discharged after losing his foot and part of his leg in combat. He has returned to North Carolina, where he makes a living delivering bootleg whiskey. Haunted by past tragedies, as well as by mounting dangers surrounding the bootleg whiskey trade, Rory navigates the increasing hazards of his life. This novel explores themes of morality, law, violence, history, and loyalty.