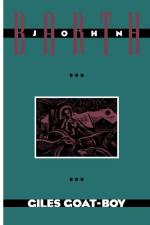 Get Giles Goat-Boy from Amazon.com

Everything you need to understand or teach Giles Goat-Boy by John Barth.

One of the attractions that Giles Goat-Boy held for its initial readers, which certainly contributed to its early commercial success, was the allegorical dimension of the novel. In this novel, Barth uses the university as a metaphor for the Cold War and divides his world into Eastern and Western campuses, with various quadrangles identified with the major powers of post-World War II politics. For example, America corresponds to New Tammany, Germany to Siegfrieder College, Asia to the monastic world of T'ang, and the Soviet Union to Nikolay College. In Barth's novel, New Tammany is led by Lucius Rexford, also known as "Lucky," a thinly-disguised portrait of President John F. Kennedy.

In addition, the various political ideologies are presented allegorically: For example, communism is described as Student-Unionism. The events of recent history are also represented in Barth's allegory so that, for example, World War II becomes Campus Riot II...

John (Simmons) Barth
6,158 words, approx. 21 pages
John Barth has taken what he considers the moribund genre of the traditional novel and has revived it with a series of imaginative and inventive "fictions." Barth writes, "If I were a painter, I would... Read more

John (Simmons) Barth
9,651 words, approx. 33 pages
In a writing career that spans five decades, John Barth has established himself as the premier writer of the postmodern novel in America. Perhaps more than any other contemporary writer, Barth has man... Read more
Download the Study Pack