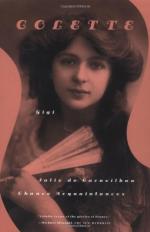 Get Gigi from Amazon.com

Everything you need to understand or teach Gigi by Colette.

Since the eighteenth century, fictional works, chiefly the novel, had dealt with the matter of younger women and girls having affairs with older men — sometimes with pleasant outcomes, as in Gigi, sometimes with unfortunate conclusions. Part of the typical story, as in Choderlos Laclos' Dangerous Acquaintances (1924; Les Liaisons dangereux, 1782), concerns seduction. In this earlier novel, a remarkable example of the epistolary form, the relationship between the older man and the innocent girl is a study of the irregular and sometimes sordid friendships of the protagonist with women.

In England, this theme about the abuse of power had occupied the pens of leading novelists, most notably Samuel Richardson and Henry Fielding. As a social concern, the subject is simply a matter of whether the girl will accede to the older man's proposition of a liaison or will hold out for marriage, thus risking the...

(Sidonie-Gabrielle) Colette
16,099 words, approx. 54 pages
No other writer appears to have told so much about herself as Colette, to have plundered so markedly her own life in each of its stages in order to create her different fictional aliases: Claudine, Re... Read more
Download the Study Pack