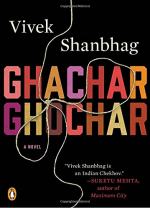 Everything you need to understand or teach Ghachar Ghochar by Vivek Shanbhag.

In his novella Ghachar Ghochar, Vivek Shanbhag presents a story of domestic drama. The main character and narrator lives with his parents, sister, uncle, and wife. Their family has experienced a recent surge in income, with the opening of their own spice firm. The novella expresses the narrator’s feelings about his family and details how his wife has irritated the climate of his household by fighting with her new family. At the novella’s climax, the narrator worries that his wife will abandon him. Things in his life have become exceedingly tangled, or ghachar ghochar. Shanbhag’s novella is written from the first-person point of view (told in the past and present tenses) and explores themes such as gender, hierarchy, and tradition.