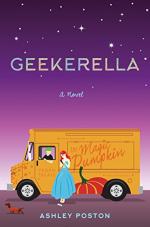 Get Geekerella from Amazon.com

Everything you need to understand or teach Geekerella by Poston, Ashley.

The classic fairytale of Cinderella gets a modern spin that incorporates science fiction, fandom, and nerd culture in Geekerella by Ashley Poston. Elle is an orphan that lives with her evil stepmother and two stepsisters. She misses her parents, who were both big fans of Starfield, her favorite television show of all time. When a reboot of the series gets the Hollywood greenlight, Elle is ecstatic, but her excitement cools when she realizes that Darien Freeman, a teen heartthrob, has been cast as the lead. When she starts texting with an anonymous fan of the show, she has no idea that it is Darien Freeman behind the words. All she knows is that she is falling for the boy on the other side of the phone. When they meet at the Excelsicon convention, their true identities are revealed, and their lives change forever. The novel explores fairytales and science fiction, fandom and nerd culture, fame and celebrity, anonymity and technology, and the importance of friendship.