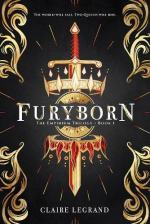 Get Furyborn from Amazon.com

Everything you need to understand or teach Furyborn by Claire Legrand.

In Claire Legrand's Furyborn, the first in a series. a prophecy promises that two queens will be born into the war-torn world that has been attacked by angels: The Sun Queen and The Blood Queen. One will have the power to save the world, and the other will have the power to destroy the world. When Rielle discovers she has magical abilities that are beyond anything the world has ever seen, she believes she is the Sun Queen, as do all of her contemporaries. Hundreds of years later, an assassin named Eliana also discovers she has superpowers. Neither girl understands her powers or what the prophecy means, but they both try everything they can to save their world. The novel explores themes of motherhood, heroes and villains, isolation, history, and conquest.