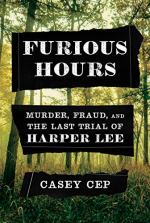 Get Furious Hours from Amazon.com

Everything you need to understand or teach Furious Hours by Casey Cep.

In exploring the story of Harper Lee's unwritten final novel, The Reverend, Casey Cep delves into the complex world of a Reverend, a lawyer, and a writer who become enthralled in this mysterious part of Alabama lore. Cep follows the story of Willie Maxwell, the lawyer who defends the man who killed Willie, and the writer who tries to document the story of the Reverend. In Furious Hours, Cep tackles themes such as truth, loss, memory, and race through the illustration of Lee's unpublished story.