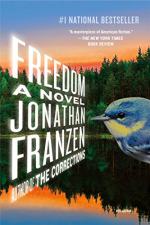 Get Freedom (novel) from Amazon.com

Everything you need to understand or teach Freedom (novel).

Jonathan Franzen's Freedom (First Picador Edition) is a story that follows the Berglund family members throughout a 40 year period. Much of this narrative is portrayed in a confession type memoir written by one of the protagonists, Patty Berglund. The major conflict of the story is the affair between Patty and her husband's, Walter, best friend. The narrative also informs the reader of the preceding events and the aftermath of this affair. A much smaller part of the novel is dedicated to telling the coming-of-age story of Patty and Walter's son, Joey. Joey's life changes forever after the September 11th terrorist attacks, which force him to reevaluate his ideals, relationships, and goals. While much of the novel is narrated by Patty in third person through her memoir, some of the novel - mostly Walter's post-affair narrative and Joey's story - is narrated by an unnamed third person narrator. This novel is a story of family politics, love, infidelity, and the nature of the world in the early 2000s. Franzen weaves all of these subjects into a swerving and unpredictable narrative that forces that reader to question the motives of people in contemporary American society.