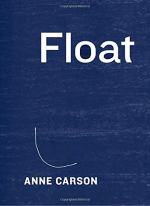 Get Float from Amazon.com

Everything you need to understand or teach Float by Anne Carson.

Anne Carson's latest, genre-bending anthology, Float, is comprised of 22 chapbooks of poetry, prose, essays, lists, and dramas, all of which range in subject from Pronouns to marriage, to grief to Dionysus. No one chapbook is necessarily more important than any other, and indeed, these chapbooks are meant to be read in whatever order, and at whatever pace, the reader desires, which makes reading Float "[like] a freefall," as the collection's back cover reminds us: an endless stumbling between and among significations. Carson chooses to write in this seemingly disjunctive fashion as a means of exploring themes of interpretation and connectivity, and in so doing demonstrates how acts of reading are like acts of translation, which is to say: both locate and allocate meaning depending on the attention, intellectual interest, and interpretive capacity of the reader or translator themselves.

Anne Carson
4,525 words, approx. 16 pages
Albert Einstein credited his discovery of fundamental laws of the universe to his ability to ask the simple questions. Much the same can be said of Anne Carson, who in her poetry and essays asks quest... Read more
Download the Study Pack