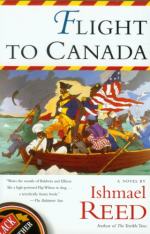 Get Flight to Canada from Amazon.com

Everything you need to understand or teach Flight to Canada by Reed, Ishmael.

Flight to Canada is a novel by Ishmael Reed. The story is a postmodern slave narrative that follows the journey of runaway slave Raven Quickskill. Quickskill wishes to escape the control of the wealthy and malevolent slave owner Arthur Swille. The book is humorous, almost satirical. It is unconventional in several ways, such as its inclusion of anachronisms like television during a story that is set in the 19th century. The novel explores themes such as slavery, freedom, morality, love, and storytelling.