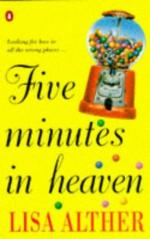 Get Five Minutes in Heaven from Amazon.com

Everything you need to understand or teach Five Minutes in Heaven by Lisa Alther.

The themes of growing up, initiation, and identity are paramount in Alther's work, and Jude's odyssey from girlhood to womanhood encompasses the embattled childhood of a tomboy raised by an adored yet somewhat preoccupied part-Cherokee father and a black housekeeper. She and her best friends, Molly and Sandy, do battle with the forces of conventional Southern womanhood and macho manhood until, undone by puberty, Molly dies in a car wreck instigated by her boyfriend Ace Kilgore, their childhood bete noire.

Although Jude learns to mask her tomboy identity and her unconventionality in small-town high school forms, she remains haunted by her differentness until her arrival at graduate school in New York, where she is reunited with, and then loses, Sandy, and meets the older woman poet Anna, who becomes her doomed lover.

Sex and death are always found close together for Jude. Her mother died in childbirth when...