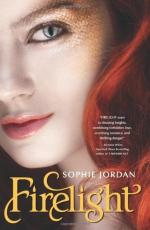 Get Firelight from Amazon.com

Everything you need to understand or teach Firelight by Sophie Jordan.

Jacinda is a teenager living in a cloistered community of people who have the ability to manifest as dragons. She has a twin sister named Tamra who has never manifested as a dragon. Jacinda's mother has long ago stopped manifesting and has apparently lost the ability. Jacinda's mother and sister are treated with indifference by the pride but Jacinda, the pride's only fire-breather, is coveted and there are hopes that she...