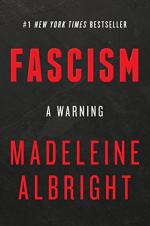 Get Fascism: A Warning from Amazon.com

Everything you need to understand or teach Fascism by Albright, Madeline.

Madeleine Albright cautions against the current resurgence of Fascism in the US and in other countries in her nonfiction work Fascism: A Warning. Her personal life as well as her professional career as diplomat and scholar have prepared her for this significant exposé, illustrating just how familiar this ideology's authoritarian nationalist characteristics have become. Professor in the Practice of Diplomacy at Georgetown University's Walsh School of Foreign Service and Secretary of State during President Clinton's eight years in office, she has firsthand diplomatic experience dealing with Fascist leaders, including, among others, Slobodan Milošević, the one-time Fascist President of the former Yugoslavia; Kim Jong-il of North Korea; and the autocratic Vladimir Putin, president and prime minister of Russia. By analyzing autocratic leaders from Mussolini to the present, Albright lays out a convincing description of what Fascism is and how to recognize a Fascist. She urges Americans to resist this anti-democratic trend that puts our way of life at risk.