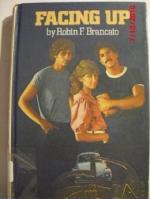 Get Facing Up from Amazon.com

Everything you need to understand or teach Facing Up by Robin F. Brancato.

Facing Up tells the story of Dave Jacoby, a somewhat conservative teenager. Spanning the last few weeks of Dave's junior year in high school and the following summer, the story focuses on the relationship between Dave and his best friend, Jep. Considering his own overprotective parents, Dave envies Jep's independence and worldliness. Jep's parents are divorced and he lives in an apartment with his mother.

In the first part of the story, Susan tells Dave that she has outgrown Jep and is planning to break up with him.

When Susan informs Dave that she now loves him, Dave is torn between his loyalty to Jep and his feelings for Susan. After witnessing Susan's shallowness, Dave decides that his friendship with Jep is too valuable to jeopardize. Before he can explain his actions to Jep...

The Facing Up Study Pack contains: