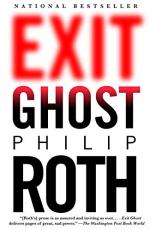 Get Exit Ghost from Amazon.com

Everything you need to understand or teach Exit Ghost.

Exit Ghost is a novel by Philip Roth. It is the final novel featuring Roth’s literary alter-ego, Nathan Zuckerman. At the beginning of the novel, 71-year-old Zuckerman is living an isolated life in western Massachusetts. He returns to New York City to attempt a reentry into society, but he finds that he now feels alienated. He develops unrequited romantic feelings towards a much younger woman, and he clashes with a young writer threatening to ruin the reputation of the deceased E.I. Lonoff, who is one of Zuckerman’s favorite writers. The novel explores themes such as fiction, aging, isolation, death, and legacy.