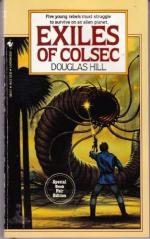 Get Exiles of ColSec from Amazon.com

Everything you need to understand or teach Exiles of ColSec by Douglas Hill.

Exiles of ColSec is a rugged sciencefiction adventure that addresses the issues of leadership, cooperation, and survival. The teen-age heroes, juvenile delinquents exiled to a distant planet, must learn to set aside their differences and work together to learn about and survive in their new home. Obstacles to their success include the menacing alien lifeforms they encounter, as well as a member of their own group, a dangerously unstable ex-government thug known as the Lamprey. While the book's futuristic plot, high-tech gadgetry, and weird aliens make for fun and imaginative reading, the author also takes on some more down-to-earth topics. His portrait of the future Earth is one of a corrupt society governed by the powerful few who exploit both their fellow human beings and the natural resources of many planets. Wealth, education, and freedom are unknown to the great masses of Earth's people, except those who manage...