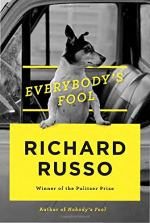 Get Everybody's Fool from Amazon.com

Everything you need to understand or teach Everybody's Fool by Richard Russo.

Everybody's Fool, the sequel to Nobody's Fool, is a contemporary novel by Richard Russo in which the lives of the people of the fictional, small town of Bath, New York, play out and intersect over Memorial Day Weekend. Douglas Raymer, police chief and titular fool, attempts to discover his late wife's lover while Donald Sullivan confronts his declining health. Raymer and Sully deal with the the return of Roy Purdy, known wife abuser, who threatens Sully's old sweetheart Ruth.