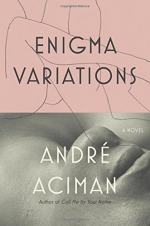 Get Enigma Variations from Amazon.com

Everything you need to understand or teach Enigma Variations by André Aciman.

Andre Aciman's Enigma Variations is a hybrid coming-of-age / erotica novel, tracing the story of the narrator, Paul, from childhood to adulthood. Paul narrates his most significant relationships, all the while musing on love, desire, transience, and regret. Some of Paul's lovers leave his life suddenly, forcing Paul to come to terms with his own mortality; others remain in Paul's life forever, providing him with valuable advice on how to pursue love. Told in five sections, each of which corresponds to one of Paul's relationships, Aciman's novel--and by extension, Paul's life--reads like a piece of music: it contains one major theme that is developed, explored, and eventually resolved.