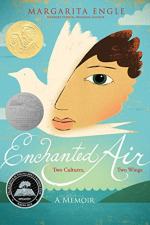 Get Enchanted Air from Amazon.com

Everything you need to understand or teach Enchanted Air by Margarita Engle.

In Margarita Engle’s autobiographic collection of poems, Enchanted Air: Two Cultures, Two Wings: A Memoir, Engle describes the first fourteen years of her life as a Cuban-American citizen, torn between two countries. Her memories include the time before the conflict between the United States and Cuba, and the impact of that conflict on her family. Themes in Engle’s poetry include bravery, coming of age, and the differences between American and Cuban cultures.