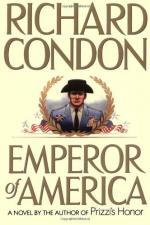 Get Emperor of America from Amazon.com

Everything you need to understand or teach Emperor of America by Richard Condon.

Emperor of America, Condon presInents a typically bleak picture of American life and politics. This tale of "the owners of the country" details how they use the United States to satisfy their rapacious greed. The most evil of the wealthy owners of America is Wambly Keifetz, who uses a nuclear bomb to destroy Washington, D.C., and nearly every government official. His scheme is to leave the American people with only one choice for a leader, Caesare "Chay" Appleton, a war hero.

Since the age of five, Chay has been in military schools and then the army, rendering him extraordinarily naive about how civilian society functions.

He is motivated by greed and easily manipulated by Keifetz, who promises him a big pension, Chay's one clear goal in life.

Keifetz uses television to manipulate the American people. Throughout the novel, Condon asserts that Americans live...