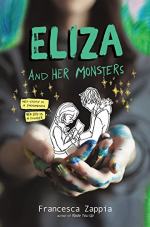 Get Eliza and Her Monsters from Amazon.com

Everything you need to understand or teach Eliza and Her Monsters by Francesca Zappia.

Eliza and Her Monsters Overview

Eliza and Her Monsters is a young adult novel by Francesca Zappia. The main character is a high school senior, Eliza Mirk. Eliza is the anonymous creator of a popular webcomic, Monstrous Sea. She keeps her identity as the webcomic's creator under wraps for fear of having to interact with her peers and others. An anxiety disorder has led Eliza to believe that if she claims Monstrous Sea as her own work, she may end up like Olivia Kane, her favorite web series creator. Fame affected Kane's work to the point that she did not finish her web series, Children of Hypnos. Ultimately, she became a recluse. Eliza is trying to avoid a similar fate.

When Wallace, also a senior, transfers to Eliza's school after his father's death, Eliza shows him around. During the tour, Wallace accidentally sees some of Eliza's work on Monstrous Sea. He thinks that she is just a huge fan of the webcomic, not the creator. Unnerved by Wallace's discovery, Eliza plays along with the misconception.

Though Eliza continues to conceal her connection to Monstrous Sea, she slowly begins to realize that she and Wallace share similarities. Both are passionate about art, and neither family understands or supports that passion. As the couple's friendship unfolds, Eiiza learns that while interacting with real people in the real world is difficult, it is worth the effort.

The Eliza and Her Monsters Study Pack contains:

Eliza and Her Monsters Study Guide