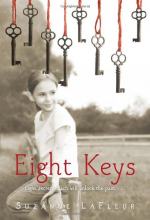 Get Eight Keys from Amazon.com

Everything you need to understand or teach Eight Keys by Suzanne LaFleur.

“Eight Keys” is a children’s novel by Suzanne LaFleur that follows the struggles of Elise Bertrand as she begins sixth grade, deals with a bully named Amanda, and does her best to make new friends while keeping old friends. As Elise attempts to navigate growing up, "Eight Keys" deals with important themes including family, friendship, growing up, death, and life.