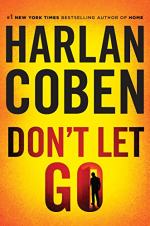 Get Don't Let Go from Amazon.com

Everything you need to understand or teach Don't Let Go by Harlan Coben.

In Don’t Let Go by Harlan Coben, the murder of a former classmate reignites Detective Napoleon “Nap” Dumas’ search for the truth about the death of his twin brother, Leo. Leo and his girlfriend, Diana, were hit by a train 15 years prior. Their deaths were ruled accidental. What Dumas uncovers proves that the deaths were anything but accidental. Themes in the novel include morality, justice, and truth.

You might also be interested in:
Back Spin
Darkest Fear
Deal Breaker
Drop Shot
Fade Away
Gone for Good
One False Move
Tell No One
The Final Detail
Run Away
The Boy From the Woods