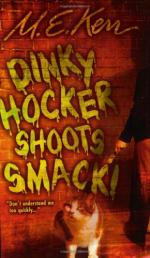 Despite its deliberately misleading title, Dinky Hocker Shoots Smack belies classification as a trendy and sensational novel of the 1970s, a decade when public outcry against drug use among youth began to surface in strength. The primary subject of the novel is not drug use, but rather the problems in human relationships that adolescents seek to escape, sometimes through selfdestructive behavior. As such, the novel ranges far beyond a simplistic morality tale about the danger of drugs.

Rather than advising readers to "just say no" to escapist behavior, the novel seems to suggest that deliberate selfevaluation and constructive communication with others may make life more meaningful. Combining humor and poignancy, Kerr creates complex adolescent characters such as Susan "Dinky" Hocker and P. John Knight, whose eccentricities reveal their burgeoning talents and deep insecurities.

Her sensitive treatment of love also departs from the stereotypical "boy meets girl" story to...