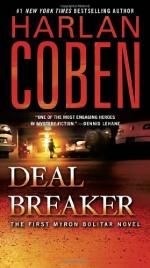 Get Deal Breaker from Amazon.com

Everything you need to understand or teach Deal Breaker by Harlan Coben.

Harlan Coben's novel Deal Breaker centers around Manhattan sports agent Myron Bolitar and his newest high-profile client, quarterback Christian Steele. Steele, fresh out of Reston University, stands to become the highest paid rookie in NFL history and is looking to sign a lucrative deal with the Titans, a New York City team. Negotiations are not going well, however, as Otto Burke, owner of the Titans, thinks the salary demand is too...

You might also be interested in:
Don't Let Go
Run Away
The Boy From the Woods
Win
Win: A Novel