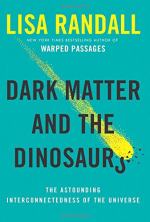 Get Dark Matter and the Dinosaurs from Amazon.com

Everything you need to understand or teach Dark Matter and the Dinosaurs by Lisa Randall.

Dark Matter and the Dinosaurs Overview

Harvard physicist Lisa Randall has once again stirred up an intellectual ferment with the publication of Dark Matter and the Dinosaurs—the Astounding Interconnectedness of the Universe. It posits that dark matter, an invisible force which makes up 85 percent of the universe, may have caused a comet to veer towards earth millions of years ago and trigger an apocalyptic explosion that killed off practically every life form—including dinosaurs.

Prof. Randall reckons that no creature larger than about fifty pounds, the size of a Dalmatian, survived the withering collision. With the extinction of the dinosaurs came an ecological niche for the rise of mammals, including humans. These occurrences raise unanswered questions about the tenancy of our species.

In Lisa Randall's previous book, Warped Passages: Unraveling the Mysteries of the Universe’s Hidden Dimensions, she reported on current physics theories that there may be as many as eleven dimensions in the universe. We humans can only experience four dimensions and only visit the others with thought experiments.

One of the purposes of the gigantic CERN Large Hadron Collider in Switzerland is to generate and map particles which may exist in multiple dimensions, although most of those extra dimensions are microscopic and very difficult to measure, according to Randall.

For many, the idea that there may be many dimensions in the universe that we cannot experience directly and the notion that 85 percent of the universe is invisible and wields a tremendous effect on the known and visible universe are unsettling. Randall continually reminds the reader that physics is a work-in-progress. New information requires new theories and new methods of testing and establishing scientific truth.

It is the journey, not the destination, that Randall finds exciting and shares with her readers in this book.

The Dark Matter and the Dinosaurs Study Pack contains: